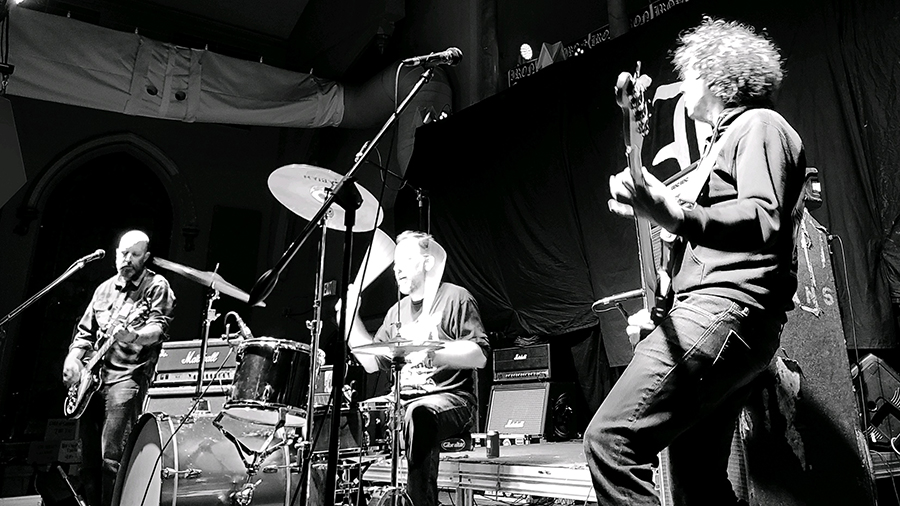 Chicago band Nonagon jams lots of complex but deliciously catchy figures into its 2021 album They Birds —it’s as full-on fun as it is angry and exacting. The delirious, spiraling rhythms of tracks like “Slow Boil” and “Boxes” belong right on the top shelf alongside the brilliantly mangled likes of Jawbox and Unwound. – Tone Madison (Scott Gordon) 6/13/22

Knife The Symphony (Cincinnati, OH) have been touring since the band’s beginning in 2006. Unafraid of volume, their banging, whirling, ridiculously rhythmic brand of Rock and Noise has been described as “needles in the red, punishing post-punk” (The Big TakeOver Magazine, Issue #77). The band owes a considerable debt to the music of SST, Touch & Go and Dischord Records. Bring your earplugs.

Maple Stave is a three piece band based in Durham, NC. Formed in 2003, friends Andy Hull (baritone guitar), Evan Rowe (drums) and Chris Williams (baritone guitar, vocals) set forth with an aesthetic rooted in the ‘90s Chicago and Louisville music scenes, with love of certain outliers like Unwound. Despite several years of living on different coasts, they have released four EPs and a full length (2010’s Like Rain Freezing And Thawing Between Bricks Year After Year, This House Will Come Down.) and toured the midwest and east coast consistently. RIYL: Unwound, Shellac, Touch & Go Records, Minus the Bear, Future of the Left.